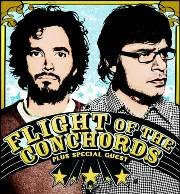 “Flight of the Conchords” — New Zealand’s fourth most popular folk parody duo, comprised of Jemaine Clement and Bret McKenzie — kicked off their U.S. tour Monday night in Tampa and I was there. (Forgive me, if it sounds like I’m bragging, but I just can’t help it.)

I’m not going to pretend like I’ve been in the “Flight of the Conchords” cult since the beginning. I saw some of their performance clips online, dug their sense of humor and blind-bought the first season of their HBO sitcom on DVD for my girlfriend Erica for Christmas. After laughing my ass off, we caught up with season 2 and went to see them in person on Monday.

Erica’s always preferred watching the live performance clips on YouTube over the glossier, more surreal music videos from the show. And after seeing them live myself, I can finally see why. While the TV show is still hilarious, watching Bret and Jemaine play off a Tampa audience they described as “obnoxious, but charming — like Will Ferrell” as they were bombarded with song requests was priceless.

After a predictably weird and funny set from Kristen Schaal (who plays obsessed fan Mel on the show) the guys took the stage, with Jemaine debuting fetching beard. I’m not going to give their set list away (which might be impossible since the guys like to act like they’re deciding what to play on the spot), but, except for “Ladies of the World” and “Hiphopopotamus vs. Rhymenoceros”, the guys performed their best-known songs.

The guys kept the spaces between their funny songs alive by engaging in their typically self-deprecating banter and by going off on their signature odd riffs (think of a whale using a cell phone). I know some comedians play music (most of the time I want them to get back to the jokes), and some musicians entertain with stage banter, but I’ve never been to a show that blends both elements so well. It was like I paid for a great concert (these guys are GOOD musicians) and a great comedy show. What I’m saying is that you should go.

Jemaine said someone reviewing the show could describe it as “meandering.” I’d agree, but I’d also add that the show “meandered” in the best possible sense, aimlessly going from one funny, unexpected place to another.

The only bad part was when it ended sooner than I expected (after about 90 minutes sans intermission).

and my obsession with the conchords deepens even more

It was truly fantastic and absolutely hilarious. I loved that, unlike concerts for other non-comedy groups, no one really sang along. Their words changed and the variety kept you wondering what they were going to sing, forcing you to stop singing along with everything but the choruses. Bret's attempt to get some "audience participation" in order to persuade Jemaine to stop being a "man ho" proved it. The guy sitting next to me was crying because he was laughing so hard. Kristen Schaal was fantastic as well, though her gold glitter pants were truly distracting.

I'm glad you posted your opinion of the concert. I wanted to see what other people who attended thought as well. I hope there's going to be a Season 3 on HBO, but we'll see. At least we got to see them in person.

good one! i just added up tons of different emo backgrounds 2 my blog
http://www.emo-backgrounds.info

What a wonderful post I have found here. Its just awesome show. I like it very much. And I am a big fan of TV shows. I always Watch TV Shows Online. Thanks for sharing such a wonderful post.